Went charm shopping today. I was looking for charms that bring to mind India. One of the charms I picked up were these brass elephants. 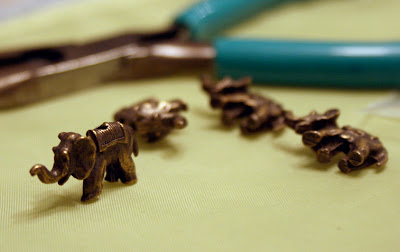 Indian/Asian elephants typically have small ears and these do not, but the "saddle" reminds me of images I've seen of people riding elephants which in turn reminds me of India.

Do you know the story of Ganesha, the Indian god with an elephant's head? Ganesha, known as the remover of obstacles, is thought to be the son of Shiva and Parvati. Ganesha was born while Shiva was away. Parvati asked Shiva to guard her chambers while she bathed and Shiva came home demanding to see his wife. When Ganesha would not let him pass, Shiva killed him. After learning from Parvati that was his son, Shiva brought him back to life and replaced his head with the first thing he saw which was and elephant's head.

There are many versions of the story but that's the one I like best.

Tomorrow we're going to the Norton Simon Museum to look at Indian art. I promise tomorrow's blog will be posted sooner than 10 minutes before midnight.