A Bracelet for Vanessa 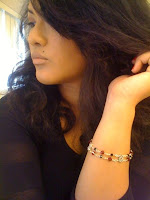 A few weeks ago, I made a bracelet for my friend, Vanessa. It was kind of a "Hey, cheer up. Here's something shiny," gift. I haven't known her for too long but she is probably one of the nicest people I've met and luckily for me, is turning out to be a really awesome friend. Also, she turned me on to barbacoa burritos from Chipotle (with guacamole, thank you very much). That in itself means we'll be friends forever.

Vanessa's favorite colors are red and black (what a great choice; those were my fave colors in high school) and I chose to make a bracelet with red Swarovski crystals and black glass beads. I used a silver plated wire for the links for her bracelet. Well, that silver plated wire tarnished quicker than you could say "monkey pants."

I also didn't think of how much Vanessa uses her hands and the original dangle I made for the end of the clasp's chain broke. Originally, it was three beads on a single head pin that was looped onto the end of the chain. Well, that head pin broke and the crystals were lost to the carpets at Borders... so I went ahead and replaced them and made three separate links hoping that the "wiggle room" of the links will make it last longer.

I ended up re-doing the bracelet with sterling silver wire. Hopefully the wire wont tarnish like the plated wire. I'm told that all metal tarnishes over time. I can't always afford sterling silver but I made this for my friend and I want it to last. Besides, the silver was on sale that week... it was like a sign. :P

Also, you can see I used clear silver lined seed beads on each link. That was to help add length and a little more shine and texture to the bracelet.

Now, because I'm a curious lass, I took the tarnished wire from the old links and wanted to see if I could just clean them up. I have a polishing cloth that says it gets rid of tarnish... and in the before and after pictures (before being on the left and after being on the right) you definitely can see a difference. I didn't get rid of all the tarnish... it was, after all, 3AM when I decided I needed to work on the bracelet RIGHT NOW. But, there was a difference. However, the silver has turned yellow. I'm assuming the metal under the silver plating is brass. Actually, I'm not even sure that the packaging said "silver plated." Maybe it just said "silver color." I should read the package closer.

I haven't a problem with tarnishing with the earrings I've made for myself (using the same metal as the original bracelet). Maybe its because it hangs off of the ear and doesn't touch skin. Hmm...
Posted by Rose at 1:55 PM