Erin Prais-Hintz, the lovely lady behind this blog challenge says, "Reading can transport you to a million different places and that is what this challenge is all about."

When I signed up for this challenge, I was nearing the end of the Inheritance Cycle by Christopher Paolini. I don't know if this series has replaced my previous favorite book but the characters are wonderful. Especially Saphira, the dragon. (Side note: If you get the chance, this series is FANTASTIC in audio.)

One of my favorite parts of the series is when Saphira loses a scale. The following excerpt is from the fourth book in the series, Inheritance.


"You're fine," said Eragon, exasperated. “Stop worrying. There’s nothing you can do about it anyway.”
Saphira growled and continued to study her image in the lake. She turned her head from side to side, then exhaled heavily, releasing a cloud of smoke that drifted out
over the water like a small, lost thundercloud.
Are you sure? she asked, and looked toward him. What if it doesn’t grow back?
“Dragons grow new scales all the time. You know that.”
Yes, but I’ve never lost one before!
He did not bother to hide his smile; he knew she would sense his amusement. “You shouldn’t be so upset. It wasn’t very big.” Reaching out, he traced the diamond-shaped hole on the left side of her snout, where the object of her consternation had so recently been ensconced. The gap in her sparkling armor was no larger than the end of his thumb and about an inch deep. At the bottom of it, her leathery blue hide was visible.
Curious, he touched her skin with the tip of his index finger. It felt warm and smooth, like the belly of a calf. Saphira snorted and pulled her head away from him. Stop that; it tickles.

I'm not sure what Eragon did with the dragon scale, but I started thinking that the jeweled scales from Christopher Paolini's dragons would probably make beautiful jewelry. 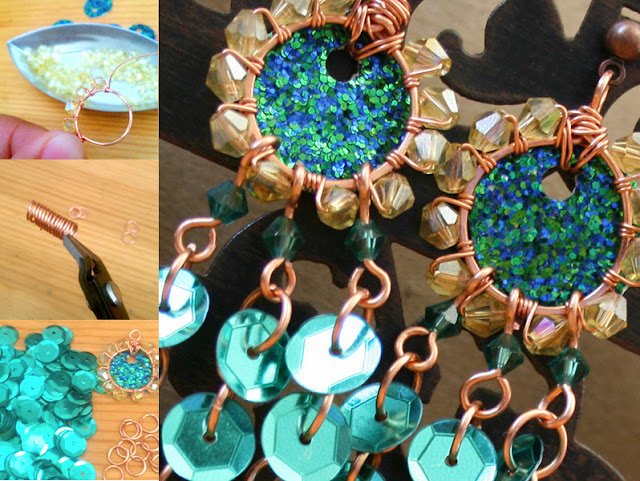 I took some glittery scrapbook cardstock and punched out two dragonscales. Take some copper wire and wire wrap some yellow crystals. Take even more copper wire and make some jump rings. Now, I bought some sequins and I'm pretending they're baby dragon scales. Attach them together with those jump rings you made aaaand... 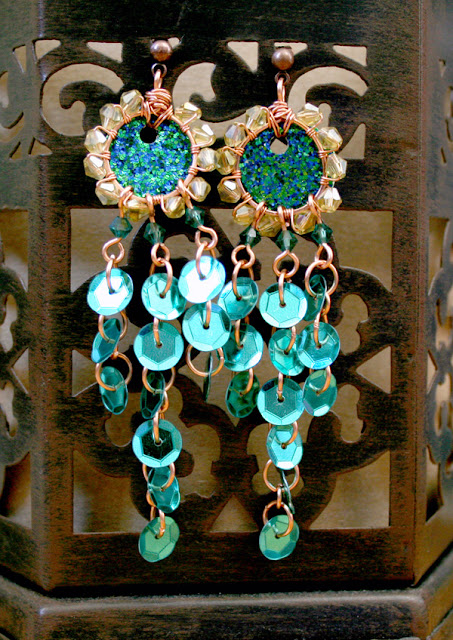 Pretty earrings. They sparkle like you would not believe. I wore them on Wednesday and they're super light because I used sequins instead of glass beads. And they're deliciously long, but that could be because I have a short neck :P

I imagine my dragon would have been teal. I would have named her Chaiti, the Hindi word for "teal."

Won't you join Chaiti and me while we go blog hopping? Here are the other participants of the Challenge of Literature Blog Hop!