A Far Off Land

RH and I have decided we are going to go to India. There's no set date yet. There's no fleshed out plan. All we did was agree that in a few years, we will be in India.

I'm not entirely sure how this fascination got started. I do know that it's something we both share and I feel so blessed that he wants the same things I want. The word marriage was thrown around in our conversations. So was the idea of moving in together. Scary conversations, yes, but exciting nonetheless. 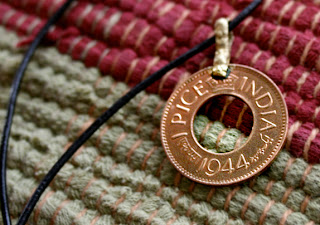 I found this pendant at a bead store in Dana Point. It's not a real coin. The owner said that the pendant was a reproduction. I'm wearing it now, strung on a simple black cord. I want to keep India fresh in my mind. I want to take it around with me as a constant reminder that I will get there one day. I've gotten in the habit of touching it before making a purchase. Like asking myself if I really need to be spending the money or if I could put it away for India. Hasn't happened yet, but hopefully I'll get better at the saving part :P 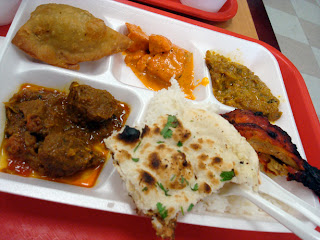 We tried Indian food for the first time last week. I LOVED it. It was a tiny little grocery store in the middle of Lake Forest. It had a tinier buffet. I tried a samosa, chicken tikka masala, some kind of veggie mush that was totally yummy but I can't remember the name of, lamb curry, and tandoori chicken... all with some rice, of course. They had garlic na'an which was HEAVEN. We had some left and I ate it later with some string cheese. RH liked the lamb curry and the rice (which meant something because he usually HATES rice) but not much else. We're going to give it another go soon. :)
Posted by Rose at 6:10 AM