I was at a loss for words when I opened this window to write. Then "Are You That Somebody" by Aaliyah (which was one of my favorite songs in high school) came on Pandora... got me dancin' in Corner Bakery and ready to write! 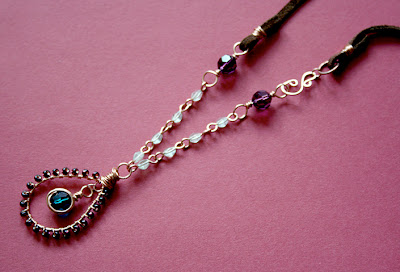 You may recognize the above pendant from this post. However, it is not that pendant. The pendant from that post currently hangs from a simple black leather cord around my neck. The one above is an almost identical pendant. It's slightly bigger and has a better wrap job... it is, after all, the second pendant I finished (started and abandoned probably three other ones). This one is going somewhere special and I don't want to jinx anything by mentioning where it's going. Sorry, folks. I'll let you know when I can :D

I didn't want to just string it on a piece of cord so I linked some minty green glass bead with copper and added some dark purple crystals. I hammered a hook clasp special for this necklace and finished it off with some brown leather. The finished necklace is a bit asymetrical because of the clasp, but I like it. I'm hoping who I send it to likes it too.

Hey, do you guys have any special tips for photographing necklaces? I was having a bear of a time trying to get the whole thing into the picture so I ended up just photographing the main part of the necklace. Do you hang them off a wall and photograph them like that? I should have done that I think...
Posted by Rose at 2:33 PM